Following assessment at the end of May the task was set to resolve developments to date. The chosen route of working with gesso and pigment would continue, in order to respond to the experience of observing the playing and changing of light and shadows on familiar hillsides. The interaction of the chosen materials would be explored through experimentation.

It was decided that colour matching the greens was becoming too much of a distraction and taking time away from the  process of allowing the materials (as much opportunity as possible), to behave as a material, rather than a material with the baggage of too many external controls and restrictions. Thus a neutral pigment, metallic and warm, was selected – gold. It already had reflective qualities dismissing the need to devise means of introducing light and dark tones artificially.

As a starting point cupboards were searched and several old sources of gold were found. Many were beyond use due to their age, that struck a familiar note. 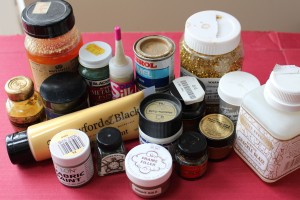 Trials commenced on small scale gesso surfaced items at first, but it was evident that something on a large scale would again be required to fulfil the brief – this included sourcing better quality pigments. As the summer gradually moved in, the sky became seemingly even larger and all encompassing. A circle came to mind, where the pigment could be allowed to flow and swirl. Ever present, the balance between treating the work as a painting or a process, was as fluid as the pigment itself.

Ideally, a work based on a firm substrate, at least three metres in diameter was envisaged. This would have provided a fabulous opportunity for process to take over from a control addicted hand. This however was highly impractical and for many reasons and so it was decided to rework part of the original triptych. This was a big decision to take, bearing in mind that a piece of work (the creation of which had taken considerable time and effort), would effectively be destroyed and that working on this scale again would involve just as much physical exertion and time input.