It is not surprising that attempts continued to be made to capture the slurring, sweeping and dappled dancing of light and shadow on the southern hills. The camera did its best, but setting it up in time to entrap momentary events was often a challenge left unmet – light and colour changes being so momentary. Nevertheless, here are some of those which were almost captured. 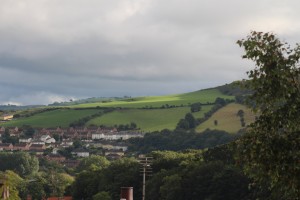 A pool of lime green floods an upper field. 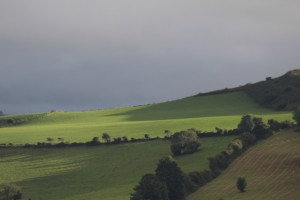 Long shadows seep across the fields just before sunset. 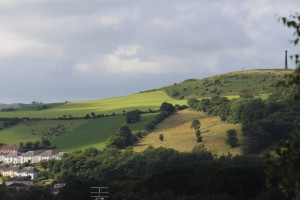 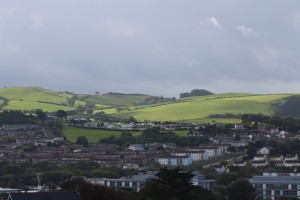 Shades of green, smear across the fields. 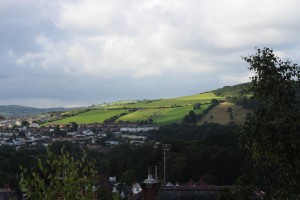 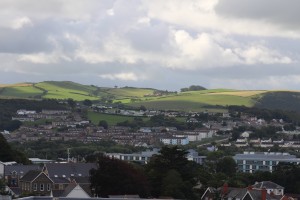 Sheets of colour spreading over the hills above Penparcau. 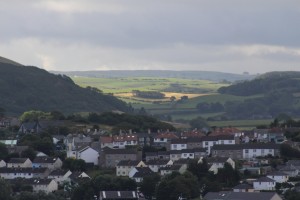 Pool of light around the copse.

The photograph set as the website banner is of the fluid light changes taking place on the hills below Pen Dinas (Aberystwyth’s hill fort), on a day of quite high humidity. The colours had become subdued and yet the presence of the row of strident conifers below the hill helped to create a striking contrast; this being the case whatever the weather conditions. The trees (planted in 1976), were all felled in the Spring of 2015, two having fallen across the road causing considerable damage during the storms of the previous January. The council decided to remove the remainder during the Spring of 2015, their disappearance – right in front of the eyes – was a considerable surprise. The area was being observed at the time and great puzzlement was caused as first one and them additional gaps appeared. A car journey across the valley followed by a brief discussion with the contractors explained the conundrum.

As the view in the photograph no longer exists, a large photograph of the website banner is being presented to (having been accepted by), The Royal Commission on the Ancient and Historical Monuments in Wales. Electronic, digital copies of the many photographs of the area around the hill fort may also be offered to The Royal Commission as well as to the archives at The National Library of Wales, in Aberystwyth.