Preparation commenced in Gallery 1 at The School of Art. Old nail holes and irregularities were filled in, sanded down and touched up with the background grey. Thanks to Ben and Phil, the heavy and cumbersome gesso panel was transferred down from Room 306. Thanks also to Angharad who caught some of this on her phone’s camera. 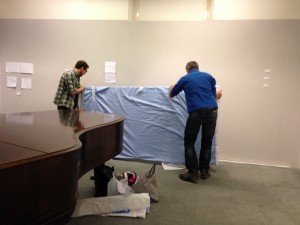 The preferred mode of presentation would have been to share the environment of the studio with the observer. A lack of space made this impossible and that led to providing illustrated information on this companion website. The website address was clearly presented on a Perspex mount, with link cards easily accessible to visitors. The exhibition statements were set deliberately lower than might normally be expected, for more comfortable readability.

Further considered options for setting out the exhibition included presenting the large board on its own, slung horizontally in industrial webbing. It could then have been viewed as a piece which might yet have another ‘processed’ life; having already been reworked from the previous exhibition. As it seemed rather mean to display only a single piece, this option was disregarded.

Also considered (but impractical due to the gallery’s exhibition board strength and dimensions), was the suspending of the large painting at an acute angle with other objects affixed so as to appear bursting forth from the energy of the painting. This would have appeared somewhat chaotic and whilst the effort involved was considerable and there having been several frustrating events during the work period, there was an important meditative element to the process which led to the production of the art works. 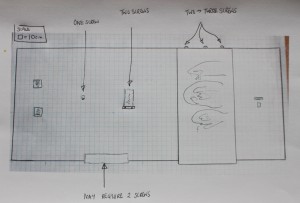 The chosen option was to exhibit three works exemplifying the explorative processes which had taken place during the past couple of months. The works were presented as a triptych, leaning on (and as if on), shelves, in the manner of their accustomed viewing. This provided for shadows behind them and for a greater range of visible marks and traces as the reflective pigments altered their appearance in changing light conditions.

Preparing the gallery space began with the tedious, tricky measuring out, repairing and touching up of wall space. 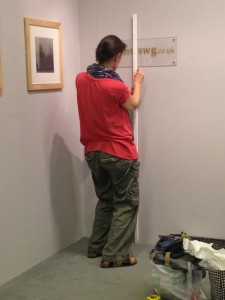 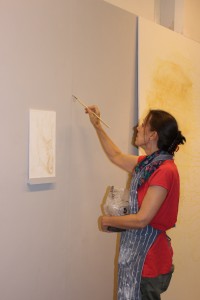 Marks and traces were sought and photographed … 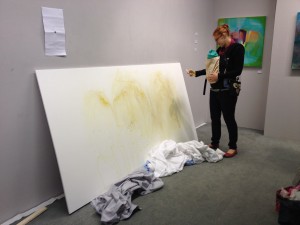 … as was the setting up process … 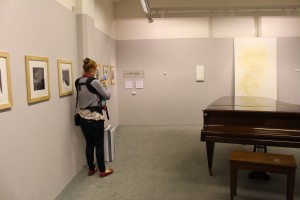 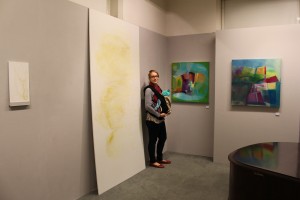 Whilst options regarding display space was restricted, it was a delight to be placed next to Cheryl’s colourful ‘Walk’ paintings.